Will Chicago Become Next City to Implement a Plastic Bag Ban? 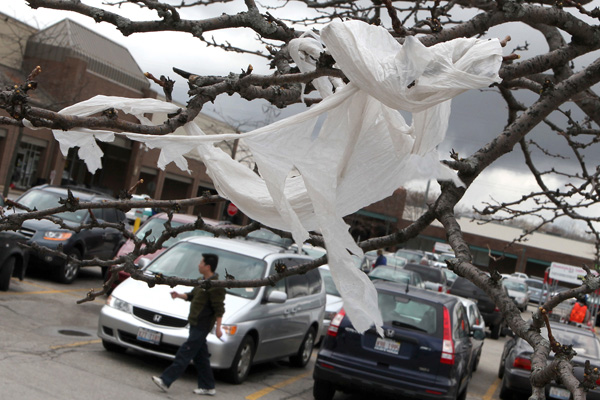 Will the Windy City be next to ban the bag?

Chicago has had an ongoing discussion about disposable plastic bags for quite a while now. It all started back in October of 2011 when a plastic bag ban was suggested. Last summer, the State of Illinois made headlines when their Governor attempted to pass radical pro plastic bag legislation in response to the proposed ban. After a lot of hard work, the proposal the Governor had supported did not pass. While nothing is final, it looks like Chicago is closer than ever to banning disposable plastic bags throughout the city.

In 2012 the Illinois legislators attempted to pass legislation that would have made it illegal for local governments to ban disposable plastic bags. The fine print of this legislation called for additional recycling efforts with the goal of dramatically increasing the amount of plastic bags recycled. Under the proposal, plastic bag manufacturers would have to register with the state, pay fees, set up bag collection and recycling programs, and keep the state abreast of the results of their efforts.

Manufacturers would also have to print their names on all of the bags they produce, so the origin of stray bags could be identified. The plastic bag industry primarily supported this measure. While increased recycling is a noble cause, and it seems very fitting to make the plastic bag manufacturers foot the bill for a campaign calling for more recycling, the notion of not allowing municipalities to pass laws regulating plastic bags was frightening.

A budding activist, 12-year-old Abby Goldberg “Activist Abby,” started an online petition urging the Governor not to sign the legislation. Goldberg was rightfully concerned that if this legislation were passed, there would be no recourse against the plastic bag litter that was destroying the beauty and charm of her Grayslake, Illinois hometown on the outskirts of Chicago. Governor Pat Quinn ultimately did not sign the legislation that banned cities and towns from passing bag bans.

Alderman Joe Moreno is backing the Plastic Bag Reduction Ordinance that calls to ban single-use plastic bags in stores larger than 5,000 sq. ft. The size requirement is intended to protect smaller stores from being impacted by the bag ban and means only larger grocery stores would have to comply.

The measure also calls on stores to offer biodegradable bags and to sell reusable shopping bags. Moreno cites a laundry list of reasons why single-use plastic bags have no place in Chicago. It is estimated that 3.7 million plastic bags are used daily in Chicago, and 3 – 5 percent of these bags become litter – that’s roughly 185,000 plastic bags each and every day that becomes litter. This is a staggering amount.

Plastic bag litter is an eyesore that makes areas look rundown, discourages tourism, decreases property values, and ends up costing tax dollars to clean up. Unfortunately, these are the less severe drawbacks of plastic bag litter. Plastic bags can clog drainage systems and compromise the integrity of these systems, resulting in flooding, which can put people’s homes and businesses in danger and can incur hefty clean-up bills and insurance claims. It’s upsetting to see money and resources go to cleanup efforts when the problem, the plastic bag litter, is avoidable.

Plastic bag litter is also a significant problem in the Great Lakes system. The bags are a nuisance for recreational boaters since the bags can become stuck in props and cause damage, as well as a hassle for the cruise lines that cater to tourists and the major shipping lines that use the Great Lakes to transport goods to and from the mid-west.

Plastic bags are also an environmental hazard because they pose a risk to animals. Land and water animals can mistakenly eat the bags or become stuck in stray plastic bags, and death typically results. 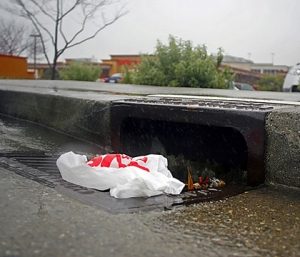 Opponents of Ald. Moreno’s Plastic Bag Reduction Ordinance claims this measure would cause grocery stores to raise their prices to account for the increased use of paper bags. Whenever a disposable plastic bag ban is proposed, the argument levied against it is always that shoppers will replace their plastic bag habit with paper bags. This launches into a discussion about how paper bags aren’t really that great for the environment because they are manufactured from paper.

Many bag bans will regulate paper bags to a degree, too. It is pretty standard for a plastic bag ban to mandate paper bags must be made from a certain percentage of recycled content, or there must be text printed on the bags indicating that they can and should be recycled after they have fulfilled their usefulness.

Regardless, the argument that shoppers will just switch to paper bags when plastic is banned never really pans out to the extent anticipated. There might be a spike in paper bag use immediately following the implementation of a plastic bag ban, but paper bags don’t offer the durability shoppers need. They do not hold up if wet and the lack of handles makes them less convenient to carry. While paper bags do cost more than plastic bags, the money stores save by not purchasing plastic bags can be directed to the purchase of additional paper bags and helps offset this cost.

There is usually a period of adjustment, but shoppers are resilient and they take to bag bans. Reusable shopping bags typically fill the void left by disposable plastic bags and it takes a little bit of time for shoppers to accumulate a collection of reusable shopping bags and to get into the habit of bringing their bags when they shop, but it works out and a lot of people actually prefer their reusable bags once they get used to them.

Critics of disposable plastic bag bans will typically set their sights on reusable grocery bags. They claim reusable bags are a breeding ground for bacteria and they cause illness. Many of these critics will also cite a study that was done on the topic conducted by researchers at the University of Arizona and Loma Linda University.

It’s worth noting that the study was partially funded by the American Chemistry Council, an organization that has been a vocal opponent of plastic bag bans, and the sample size was extremely small which from a scientific standpoint made the researchers unable to draw an accurate conclusion – although they didn’t let that stop them from publishing their so-called results or rather agenda.

When in doubt fill a sink with warm soapy water, submerge your reusable bags one at a time and swirl them around the sink several times. Make sure to rinse the bags thoroughly and let them air dry. It requires very little time and effort but this simple step is all that’s necessary to prevent the growth and spread of bacteria.

Establishing a routine and washing reusable shopping bags is part of the process of making the switch, but in the end, this small chore is completely worth all of the environmental benefits gained by doing away with disposable plastic bags and using reusable grocery bags.

What the Future Holds for Plastic Bag Ban in Chicago

The City Council Committee on Health and Environmental Protection heard testimony recently on Chicago’s proposed Plastic Bag Reduction Ordinance. While no vote took place there were a lot of positive discussions and it was evident there is a great deal of support for such a ban. This has been a long process that at times was just plain dicey, so it’s really nice to see a productive dialog on the topic of banning disposable plastic bags in the Windy City.

Efforts in Chicago have been renewed by the recent passage of a plastic bag ban in Los Angeles. The bag ban in LA proved that it can be done – a major city can pass a single-use plastic bag ban. Next steps have not been set regarding Chicago’s Plastic Bag Reduction Ordinance, but we for one are anxiously keeping an eye on Chicago and we cannot wait until we can give them a green pin on our bag ban map.

Until then, check out the cities worldwide that have gone reusable on our interactive bag ban map and if you are a business check out all of the ways we can help you go green.

3 thoughts on “Will Chicago Become Next City to Implement a Plastic Bag Ban?”