The Steve Castor Bag: The Fresh Market Grocery Bag That Broke the Internet 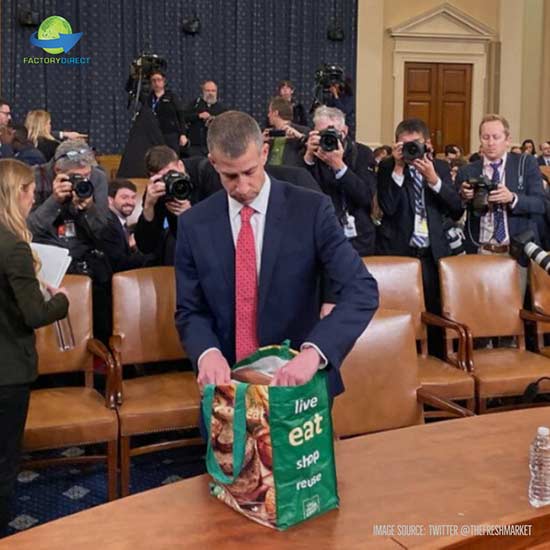 For a brief moment during the otherwise intense and serious impeachment hearings, people focused their attention on a reusable grocery bag. The bag in question was carried into the hearing room at the U.S. House of Representatives by Republican Counsel Steve Castor. This reusable grocery bag stood out because typically, lawyers opt for boxes or briefcases to carry important documents when questioning witnesses during legal proceedings.

Was this reusable grocery bag choice part of a larger plan or did Castor simply grab the first thing he found as he packed up for the hearing? We look into this story to try to get to the bottom of these questions and explain the true value of reusable grocery bags.

Steve Castor is a seasoned lawyer who is currently the chief investigative counsel for the U.S. House of Representatives Committee on Oversight and Government Reform. Castor earned his bachelor’s degree in business logistics from Pennsylvania State University in 1995 and went on to get an MBA as well as a law degree from George Washington University.

I can tell you firsthand that Steve Castor is an incredibly skilled questioner … he was by far the most important staff member during my @GOPoversight days … he was consummate professional and was always on his A-Game https://t.co/OQVfd0Yn4E

He began a career in private practice before diving into government work where he has established himself as fair, thorough, and effective.

“He has the longest-running institutional knowledge of most anybody on our side of the aisle,” Jason Chaffetz, a former Republican congressman turned Fox News pundit, told the Daily Beast.

Practically nothing goes unnoticed thanks to the Internet, but Castor’s bag choice caused quite a stir. All of social media, mainstream media, and all of the Internet were talking about the “Steve Castor Bag”. Unfortunately, much of the conversation focused on how he must not have been able to afford something better with which to carry his documents, that he was ill-prepared perhaps, or even inept.

Note to Steve Castor’s family: He needs a briefcase. This is not a good look for Impeachment Hearings televised around the world. Also, he needs a bit of coaching in the ‘Fake-it-’til-You-make-it’ category.#SteveCastor #ImpeachmentHearings pic.twitter.com/RTiVuJrXgO

But perhaps Castor was sending a message of some sort. What if instead of being cheap, he was trying to get the country to #GoReusableNow? What if instead of being ill-prepared, he purposely chose to use that particular bag with the bread and was trying to convey some other message, maybe about sustainability? Regardless of the reasoning, Castor has certainly has upped the profile of the usefulness of reusable grocery bags.

Reports had indicated that it was a Whole Foods Bag (one of our clients along with Trader Joe’s) but it was actually a Fresh Market reusable bag with images of bread. This dual handled bag appears to be made from either woven or non-woven polypropylene, meaning it is eco-friendly on two fronts: it is made from recycled content and it reduces the need and use of single-use plastic bags. The spacious interior compartment can fit a full load of groceries or several binders packed to capacity with legal documents, making it really versatile and handy to keep around.

#SteveCastor‘s Whole Foods grocery-bag-turned-briefcase shows me the caliber of Trump’s defense – a lot of lettuce signifying nothing. https://t.co/J2yBLZ0am3

The bag also features full-color printing on all sides, including the gusset where the message “live, eat, shop, reuse” can be seen. This is a great example of how printing on all sides of a reusable grocery bag can help a message stand out. Printing a logo, slogan, or other relevant info on the sides of a reusable grocery bag creates a cohesive look that is highly visible.

Create Your Own Reusable Grocery Bags and Get Noticed

While the impeachment hearings are serious business, what this brief interlude shows us is that branded promotional products can surface at any time and deliver a powerful message. Steve Castor (and many others) probably feel his bag of choice did not necessitate all of the attention it has received, and he probably also wishes we would move on to the actual content of the hearings. However, this reusable grocery bag highlighted just how effective eco-friendly promotional products can be.

Have you thought about marketing your business with reusable grocery bags? We have made it easy for you to get started. Design your own reusable bag now! And feel free to contact us if you have any questions. After more than a decade in business, we know how to make the process easy and affordable for you.