Paper or Plastic? How Austin, Texas Says NO to Both 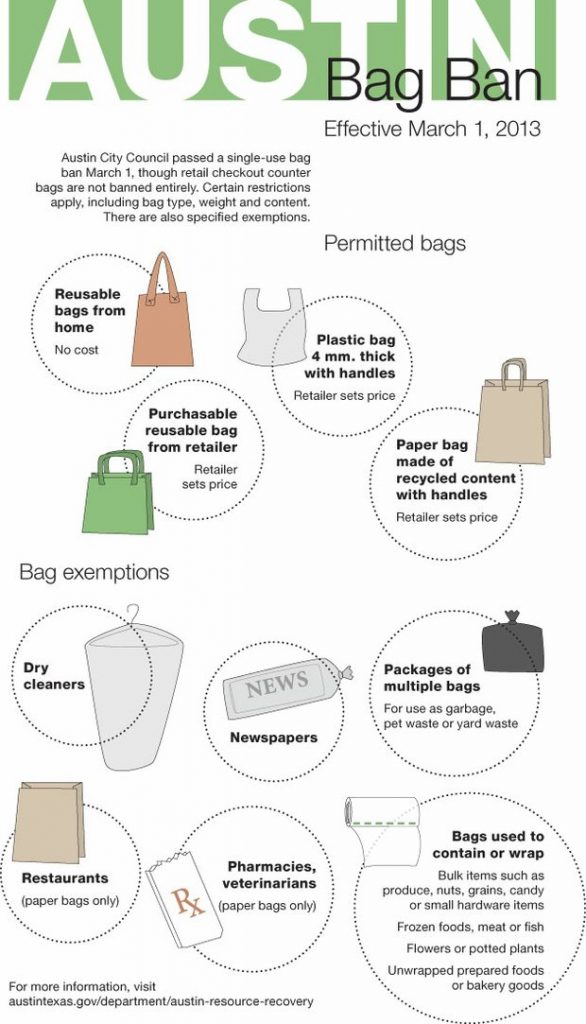 How Austin, Texas Is Gearing Up for The Bag Ban

Austin, Texas is gearing up for a ban on both plastic and paper disposable shopping bags that is going into action on March 1, 2013. The ban was approved by the Austin City Council in March of this year. The powers that be in Austin wanted to make sure they got the ban right the first time, so they took special care to draft a law that would fit what the residents wanted.  Residents were invited to speak at public forums and the bill was drafted and re-drafted before the final version went to vote.

The Austin Resource Recovery is the branch of the local government that is overseeing the transition to an eco-friendly existence without disposable bags, and this bag ban is just the first step toward Austin’s goal of reaching zero waste by 2040. Environmentally friendly, zero waste is an extremely ambitious green goal, but based on the care and attention given to crafting the bag ban, it is clear the City of Austin will find a way to reach their very important green objective.

For Austin to reach zero waste in 28 years would require a reduction in the amount of trash destined for landfills by 90 percent. Since plastic shopping bags make up a chunk of that trash in landfills, giving disposable bags the boot is a pivotal step toward reaching Austin’s eco-friendly zero waste goal.

The Austin, Texas bag ban is anticipated to drastically reduce the amount of litter on streets and sidewalks so the city will spend less money cleaning up the environment and the money saved from cleanup efforts will go toward helping folks adjust to the bag ban.

“We feel that the general majority of Austinites support going to a reusable system,” explained Bob Gedert of the Austin Resource Recovery. “The question to most citizens is ‘what’s the easiest system to get there?”

March 1, 2013 should come and go in Austin without issue. The City has their eyes on the prize and banning disposable grocery and shopping bags in favor of reusable grocery bags will get them another step closer to their goal of zero waste.

The City of Austin has earmarked $2 million to go toward an outreach education program to help residents prepare for, and understand the bag ban.  Unfortunately, the majority of the money for the education program will not be available until after the bag ban takes effect, but the Austin Resource Recovery has not let that stop them from starting to spread the word.

The agency has set up times and locations throughout the city to distribute reusable cloth bags to residents. The plan is for people to get in the habit of bringing their reusable shopping bags when they head to the store before the ban takes effect on March 1, and hopefully by the time the ban rolls around people won’t even notice because they will already have made the switch to reusable bags.

When purchased in large quantities reusable grocery bags can be a great deal and they are also a great green marketing tool.  Just think of how quickly the eco-friendly bag ban message would get across to the public if reusable bags were imprinted with a branding message, slogan or other key information like the date the ban starts.

When a person carries a custom printed reusable bag, the message on that bag reaches all of the people who encounter that person throughout the day.  The person carrying the reusable bag is almost like a mobile billboard – reminding the community that the ban is coming and that they too, need to make the switch to reusable bags.

One thought on “Paper or Plastic? How Austin, Texas Says NO to Both”