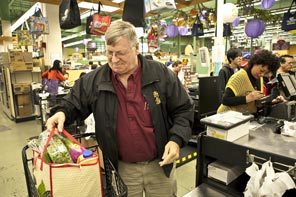 Seattle Shoppers Sound Off on Ban

In July 2012 plastic bags were banned in the city of Seattle. The law also levies a 5 cent fee on paper bags (stores keep all of the money raised by the bag fee). What sets Seattle’s ban apart from the numerous other cities and counties that have also banned single-use plastic bags is that it forbids disposable plastic bags in all grocery and retail stores, including department, clothing, convenience, and home-improvement stores. Most bans only apply to grocery stores and sometimes pharmacies and restaurants – Seattle’s bag ban is very far reaching.

In October 2012, a mere 3 months after the bag ban went into action, the group Environment Washington surveyed 891 customers outside of 9 different grocery stores in Seattle. Employees at 6 of the stores were also surveyed, in addition to phone interviews that were conducted with 31 different small businesses.

The survey gives a glimpse into what folks in Seattle think of the ban and how they are responding to it. This is valuable information that gauges the reactions of the people impacted by the ban while it is still relatively new. This is also valuable data for cities considering a ban of their own since it lets them learn from the example Seattle has set.

When the results of the study were tallied, it was discovered that 64 percent of customers support the ban, while 61 percent of businesses back the ban. Getting used to a bag ban takes some changes in habits, and those are some significant numbers of support. As the environmental benefits of the ban begin to take root and shoppers further entrench the habit of bringing their reusable grocery bags along when they shop, it is very likely that the percentage of shoppers who support the ban will increase.

It is not surprising to see the high percentage of support businesses give the ban given that the retailers benefit greatly. Stores no longer purchase plastic bags as a result of the ban and that equals a cost savings. Stores also keep the fee levied on paper bags which covers the expense of this purchase, so the bag ban helps the retailer’s bottom line.

To be fair, the retailers are also the front line when it comes to enforcing the ban, given that cashiers and baggers are the ones who have to tell shoppers plastic bags are not available. With 61 percent of retailers backing the ban at the three month mark that number is sure to grow as retailers continue to save money and as more shoppers grow accustomed to the ban.

Seventy-seven percent of stores that offered plastic bags before the ban have seen an increase in the use of reusable shopping bags. While such a big increase in reusable shopping bag use is to be expected given the ban, that number is sure to grow even more. This survey shows that the plastic bag ban in Seattle has had an overall positive impact several months in – and that positive change will continue to give shoppers a reason to develop their habit of bringing their own reusable bags and the benefits on the environmental front are just starting to show.