States Ban The Bag: States on the Verge of Plastic Bag Bans 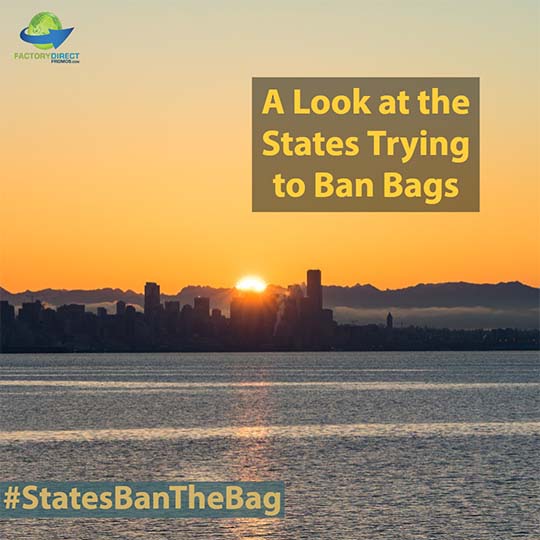 A Look at the States Trying to Ban Bags

Passing bag bans is hard work. A lot of planning and organizing goes into the ban. The people behind all of the bag bans featured in our #StatesBanTheBag series know this first hand. The people currently working to ban bags in several other states know this, too. There are several states which are very close to banning bags, but they’re not there just yet. In this post, we look at the states which are on the verge of passing state-wide plastic bag bans.

The bag ban movement has continued to gain ground in the Bay State. Over 50 percent of Massachusetts residents are currently impacted by bag bans because 122 cities and towns have a law regulating bags in place. New municipalities join the list just about every month. Since bag bans are well received in Massachusetts, a state ban makes a lot of sense.

Efforts have been underway to implement a state bag ban since 2016. Those initial efforts failed to pass, but new legislation has been proposed. The most recent proposal would ban disposable plastic bags and impose a 10-cent fee on paper bags.

Boston lawmakers first proposed a plastic bag ban in their city in 2007. That ban did not become a reality until December 14, 2018. Some people have contended that once Boston’s ban was in place, a state-wide ban would follow. That has yet to happen, but Boston’s ban is still relatively new.

Bag bans have had a tumultuous history in Rhode Island. The capital, Providence came extremely close to implementing a bag ban, only for things to fall apart at the last minute. While statewide bans have been under consideration for a while, a ban just never came together.

Despite these setbacks, 14 cities in Rhode Island have passed and implemented single-use plastic bag bans. Things are changing for Providence and possibly the state. A ban was signed into law in the city of Providence this past June and a state ban came very close to passing.

A statewide ban proposal from 2017 actually failed to gain support from environmental groups because they felt the ban was not strict enough and would fail to fully address the resulting litter problem. Just this year, two proposed bills calling to ban disposable plastic bags have been making their way through the state government.

The Senate approved their bill which included language to eliminate a loophole concerning thicker plastic bags. The House bill did not adopt the changes regarding thicker bags, however, it was amended to remove a 5-cent fee on paper bags. Ultimately, the bill did not pass in the House.

San Francisco often gets the credit for passing the first plastic bag ban in the United States. While San Francisco did technically pass a bag ban, a variety of legal setbacks delayed the start of the ban by several years. Immediately after San Francisco’s ban was passed and just when the legal roadblocks were getting into place, Seattle passed and implemented their own plastic bag ban.

Seattle’s bag ban was approved on December 19, 2011, and went into action on July 1, 2012. From that point on, the people of Washington have been continually working to do more in their quest to go green, switch to bags that can be reused and reduce the use of the damaging impacts of single-use plastic.

Washington lawmakers were working on banning bags throughout the state as early as 2011. The first two proposed bills, HB1877 and SB5780, both failed to pass. The bills were reintroduced a year later, but neither received the support necessary to advance.

This past year, SB 5323 was prosed. The latest bill calls to ban single-use plastic bags while imposing an 8-cent fee on paper bags. The bill passed in the Senate but failed to pass in the House. Proponents want to continue efforts to ban bags in Washington. Currently, almost 30 cities in the state have bag bans.

It is very likely Massachusetts, Rhode Island and Washington will have single-use plastic bag bans in the near future. Each of these states has been working diligently to implement bag bans for a number of years and with each attempt, the details are worked out and the ban is more aligned with the unique needs of each state.

We will continue to report on the developments in these three states, as well as the bag ban movement as a whole. Learn more green news and stay in the know when we offer Eco Specials when you subscribe to our newsletter!