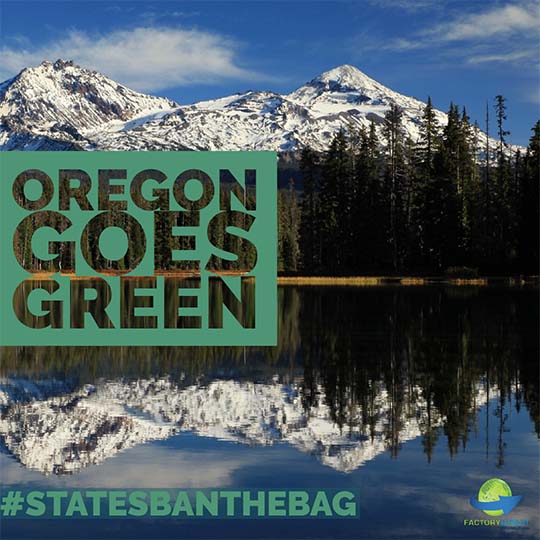 Oregon is the sixth state to ban single-use plastic bags and make the move to bags that can be reused. Given the strong ties many residents feel to the environment and the pull of the natural beauty of the Beaver State, it is no surprise this ban was approved. For this installment of #StatesBanTheBag, we look into the history of bag bans in Oregon, what went into passing the state ban, and what else was banned to protect the environment.

Oregon boasts a variety of rugged landscapes in the 98,381 square miles that make up this state. A total of 362 miles of coast along the Pacific Ocean is boarded by the Cascade Mountain Range. East of the mountains is the high desert region of the state. Although, about 48 percent of Oregon is forestland. From beaches to mountains and even high desert, there is a lot of very different landscapes to explore in Oregon.

Portland was the first city in Oregon to pass a disposable plastic bag ban back in 2011. Since then other cities and municipalities followed Portland’s lead, bringing the total number of bag bans in the state up to 10.

City bag bans achieve the objective of reducing trash on a local level. State bans deliver larger results by impacting the entire state. State bans also simplify operations for retailers and make things easier for shoppers since there is one consistent law. Sen. Michael Dembrow, D-Portland, a supporter of the state bag ban explained, “We need a consistent, statewide effort to have a truly meaningful impact in keeping plastic bags out of our natural environment and out out of our oceans, where they are doing significant damage to aquatic life.”

The bag ban was approved by both the Oregon House and Senate and signed by Governor Kate Brown on July 8, 2019. The ban will become effective on January 1, 2020. Single-use plastic bags will be banned under the law. Retailers can provide reusable plastic bags that are at least 4 mils thick or paper bags made from at least 40 percent recycled content for a 5-cent per bag fee. Restaurants can provide recycled content paper bags free of charge, however, they must charge at least 5-cents for each reusable plastic bag handed out.

At the same time the bag ban was passed, the governor also signed into law a ban on single-use plastic straws. The straw ban is effective immediately and provides exceptions for healthcare facilities and if straws are requested. A ban on polystyrene foam food containers failed to pass during this session.

#StatesBanTheBag is a series dedicated to telling the story of each state-wide bag ban. We have long been interested in the bag ban movement, and we are so happy to see the positive impacts these bans have had. Now that bans are beginning to be implemented at the state level, the positive changes will be even more widespread.

Check back later to learn more about bag bans at the state level in our next #StatesBanTheBag installment. In the meantime, you can ensure you are always up-to-date when green news breaks by subscribing to our newsletter.