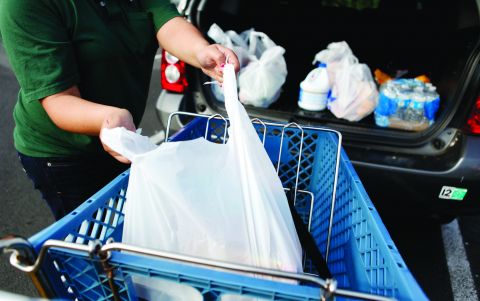 Hawaii is known for stunning natural beauty and this environment is very much tied in to the culture and the day-to-day life of those who call the island chain home. This makes unsightly litter all the more unsettling. To help protect the beauty and integrity of their home and to do right by the environment the Hawaii County Council approved a bill to ban plastic bags on the Big Island. The bill barely passed with the 5 minimum votes needed to get the measure in front of the mayor, Billy Kenoi, who in turn waited till the last day possible to sign the bill into law. The bill is similar to bans passed in Kauai and Maui counties and the first phase will go into effect on January 17, 2013.

The mayor released a two-page letter to council members explaining why he chose to sign the bill into law. There was a lot of opposition regarding the bill because many residents feel they should have the choice to decide whether they use plastic, paper, or reusable bags. “Yet, this bill holds the promise of keeping our island clean, healthy and safe, and we need to finish the job,” Kenoi told lawmakers. Plastic bags litter waterways and are a danger to marine animals, which is bad enough, but tourism is major business in Hawaii. When the beauty of beaches and rivers and jungles are marred by plastic bags it can ruin the experience for visitors. If the problem was to go on unchecked and word got out that this gem was rundown it could put an end to the flow of tourism dollars which are the main financial support for many businesses.

Paper bags are still allowed under the new provision and many residents feel that paper bags are just not cut out for the often rainy Big Island. Since paper bags do not hold up all that great when wet a better solution would be reusable bags. Since reusable bags come in a variety of materials it is easy to find a bag that fits the need. Polypropylene bags which are made from recycled plastic are water-resistant, so inclement weather is no match for these bags. They hold up with no issues and can keep their contents dry if caught in the rain. Another advantage of reusable bags over paper is that reusable bags feature a more durable design and solid handles. Paper bags need to be supported from the bottom while carried and the handles can tear if carrying a heavy load. Reusable bags do their best work when fully loaded and many feature long handles that can be slung over a shoulder for comfortable carrying.

The bill was carefully crafted to reduce the number of plastic bags in circulation. The timing was also setup so as to give stores the opportunity to use the plastic bags they currently have in stock, and not cause any undo financial stress by saddling stores with plastic bags they paid for but cannot use. Everything will be business as usually until January 2013, at that time stores will have to charge shoppers for each plastic bag they use, shoppers who bring reusable bags will not incur any charge. Beginning in January 2014 plastic bags will not be allowed and paper or reusable will be the only options. Another advantage of the delayed start date is that it allows residents the chance to learn and adjust to how the ban will impact their daily lives, as well as give them the opportunity to stock up on reusable grocery bags. It can be trying for shoppers to remember to bring their bags so this postponed start will allow residents to develop the habit of bringing bags while giving them the safety net of plastic bags for the time being.

The Law That Almost Wasn’t

Kohala Councilman Pete Hoffmann is the main driving force behind the bill. This bill was not even his first attempt to make the Big Island a plastic bag free zone. Hoffmann’s first foray into plastic bag banning legislation was voted down in February 2010. Several council members failed to win their re-election efforts and their replacements were onboard with the notion of the bill. The new membership on the Council was able to pass Hoffmann’s second take on the bill. The second draft was altered slightly with feedback received during the first effort. For instance, the first version of the bill included a penalty provision that called to fine violating businesses as much as $500. The provision also required the police department to enforce this penalty. There was negative criticism regarding this aspect of the bill so the version that eventually passed stresses education over enforcement to help get everyone onboard and committed to the ban.

Had the bill passed with six votes it would not have required the mayor’s signature to become law, since it received five votes the bill had to go in front of the mayor, who in turn could have vetoed the bill. One of the reasons the voting was so close was due to the fact that Hamakua Councilman Dominic Yagong abstained from voting because he cited a conflict of interest. Yagong manages a local supermarket chain that would be impacted by the outcome. With this in mind he felt it would be best to maintain the integrity of the vote and not weigh in since his personal business had a stake in the final decision.

Mayor Kenoi is committed to making this ban work and sees it is a major step towards the county’s ambitious goal of zero waste. “In the end, this bill is not about plastic bags, politics or the Hawaii County Council. It’s about protecting our beautiful island. While I may have preferred a slightly different version, I will sign Bill 17, Draft 2 because it is about the values we hold as a community to provide a positive future for our children,” added the Mayor.

To learn more about the bag ban on the Big Island check out https://www.hawaiinewsnow.com/story/16373869/plastic-bag-ban-approved-on-big-island and https://www.hawaiitribune-herald.com/2012/01/18/hawaii-news/kenoi-oks-bag-ban/.