States Ban the Bag: Reading The “Fine Print” on The Maine Bag Ban 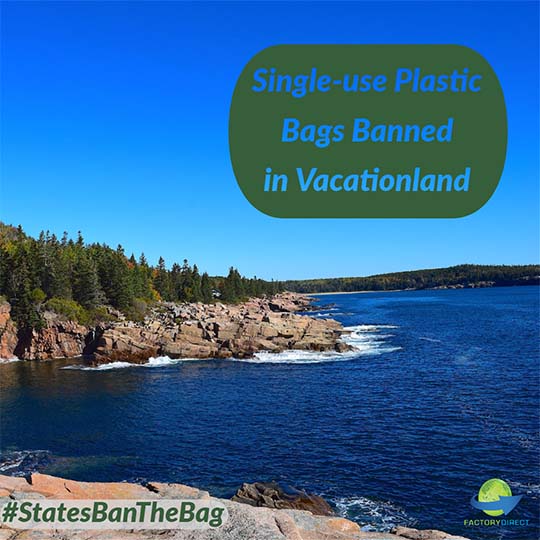 On June 18, 2019, Maine’s governor, Janet Mills, signed a statewide single-use plastic bag ban into law. As part of our #StatesBanTheBag series, we look into the fine print on the law, what led to it, and the impact this bag ban will have on residents, tourists, and the environment.

Maine’s bag ban goes into action on April 22, 2020, which very fittingly is Earth Day. Under the law, retailers are prohibited from dispensing single-use plastic bags. Businesses can provide paper bags for a 5-cent fee per bag. The bag fee is not applicable to restaurants, as well as stores with relatively few food sales.

Retailers can hand out reusable plastic bags, however, these reusable bags must be at least 4 mils thick. The thickness requirement is intended to ensure the bags are durable and truly are reusable.

Many major retailers in Maine supported the notion of banning single-use plastic bags, partly because it would simplify their operations. Different laws in different cities and towns mean businesses with multiple locations throughout the state need to adapt and ensure they are following the proper laws at each location. A state-wide law means there is one law that impacts every retail establishment in the state.

When you look at the single-use plastic bag ban movement in Maine as a whole, a pattern emerges. All of the cities and towns which initially passed local bans or fees are located on or near the coast. Litter, particularly plastic litter, is a much more visible problem in marine environments.

The majority of Mainers live along the coast with about 40 percent of the state’s population living in and around the seaside city of Portland. Furthermore, Maine’s economy relies heavily on the ocean. Protecting the 3,478 miles of coastline also protects the ocean and ultimately helps to protect Maine’s economy and the livelihoods of many residents.

Learn About the Movement

Maine was not the only state to ban single-use plastic bags on June 18, 2019. Stay tuned to find out which fellow New England state passed a single-use bag ban on the same day.

We have been hard at work for many years tracking the bag ban movement in the U.S., as well as throughout the world. Lately, we noticed a trend as many states were banning single-use plastic bags. This was the inspiration behind our series, #StatesBanTheBag.