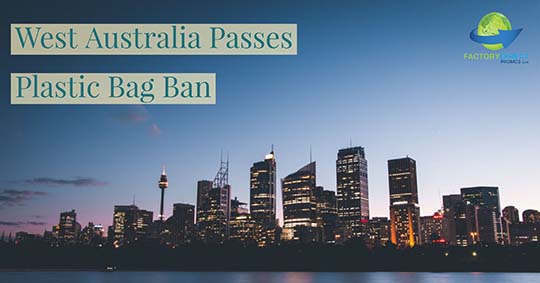 West Australia’s plastic bag ban will become effective on July 1, 2018. Public comment is welcomed as part of a consultation process. Through March 9 residents can share their thoughts concerning how the ban should be implemented. Involving public comment is an effective strategy to ensure the transition process is effective and successful.

Australia as a whole has long been a supporter of plastic bag bans. A 2017 survey found that a staggering 84 percent of West Australia households were in favor a banning disposable plastic bags. With this level of support, it is likely the bag ban will go into action without a hitch and reusable bags will be more important than ever.

West Australia makes up about one-third of the total land mass of Australia. The population is slightly less than three million, with the highest concentration of people living in the capital city of Perth.

Most of the state is arid outback, but West Australia also boasts the most about of coastline compared to other Australian states and territories. The stunning coast coupled with a love of nature and the outdoors is what typically prompts people to support plastic bag bans.

Disposable bags tend to end up as litter, which mars the natural beauty of a landscape. Plastic bag trash also poses a serious health risk to animals who can easily mistake the bags as food. Once ingested by animals single-use plastic bags can lead to death. The hazards are much more treacherous for marine animals. Plastic bag trash is a threat to the health and well being of animals and their habitats and even our food chain.

Plastic bag bans are already in place in South Australia, Tasmania, the Northern Territory and the Australian Capital Territory. A ban is set to go into action in Queensland the same day as West Australia, July 1, 2018. Victoria has announced their own plastic bag ban; however, a launch date has yet to be selected.

This leaves New South Wales as the only Australian province without a plastic bag ban in place, or a plan to implement a ban. Check out our map to learn more about the plastic bag ban movement and see which cities, states and countries have plastic bag bans in place.

With single-use bags out many consumers turn to eco-friendly tote bags. One reusable grocery bag can do the work of hundreds, possibly even thousands, of disposable bags. Reusable tote bags are even more eco-friendly when they are made from sustainable or recycled materials.

Learn how custom eco-friendly tote bags can help the environment, shoppers and your brand by reaching out. With over 20 years of experience in the custom reusable bag business, we can help you design and create the perfect reusable promotional bag for your brand.