Scientists Ask The Question…Is Our Food Chain Feeding Us Plastic?

This Is No Joke…

It is estimated that every minute, 1.4 million plastic bags are used worldwide each year and 50 billion plastic water bottles are discarded just in the United States alone. So it is not surprising that UC Santa Barbara scientists approximate there to be 5.25 trillion pieces of plastic in the world’s oceans.

Plastic trash can have a major impact on animals and their habitats and this begs the question of what sort of impact this litter is having on the food chain. The question is so important that there are several scientists looking into whether plastic pollution is inadvertently ending up on your dinner plate.

The Journey of Plastic Litter

As plastic is tossed around in the ocean currents, it is broken apart into smaller and smaller bits. Eventually these plastic particles are so tiny that fish and other marine animals can easily consume them. There are a couple things that can happen when animals consume plastic. Spoiler alert: none of these outcomes are good. 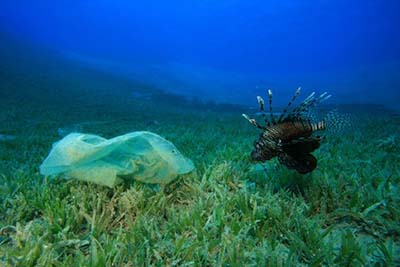 Animals cannot process plastic once it ends up in their digestive system. In some instances, the plastic trash becomes tangled or blocks the animal’s system and can lead to death.

In other instances, chemicals from the plastic can be absorbed into the animal’s flesh. This can lead to liver and reproductive problems, which in turn can impact population levels.

If a species experiences a population decrease, this can wreak havoc on a food chain since this link of the chain will no longer be around to keep the population levels of their prey in check, and their predators will no longer have this food source. This can impact every animal further up on the food chain, and since humans are at the top of most food chains that can be a problem.

Another possible outcome when plastic enters the food chain is that as things play out and smaller animals (and the plastic inside of them) are eaten by larger animals, the plastic and chemicals are passed on and travel further up the food chain.

Since it is known that plastic can cause health trouble for fish that directly consume plastic, it is reasonable to presume that an animal that consumes a fish that has eaten plastic will experience similar issues. Plastic tainted fish more than likely have an impact on the rest of the food chain, and since the ocean is such a major food source this is alarming news for humans.

Long Term Consequences of Plastic In Food Chain Being Studied

Scientists at UC Davis, are trying to determine the implications of plastic entering the food chain and what consuming plastic tainted fish means for humans, but right now those answers are not known.

Still, logic dictates that this plastic consuming plastic will cause harm.

Plastic and the chemicals that leach from it are not intended to be consumed. Right now all we can do is wait for the scientists to complete their work and do our part to clean up. Whether you volunteer to participate in organized cleanups or if you pick up stray pieces of litter as you find them every bit helps.

Even if you live nowhere near an ocean there is still a major benefit to picking up plastic litter. Marine animals are more likely to consume plastic, but this is not a problem exclusive to them. Make sure to properly dispose of plastic trash and opt for reusable items such as aluminum water bottles over disposable every chance possible.

One thought on “Scientists Ask The Question…Is Our Food Chain Feeding Us Plastic?”