Plastic Bag Bans Around The World 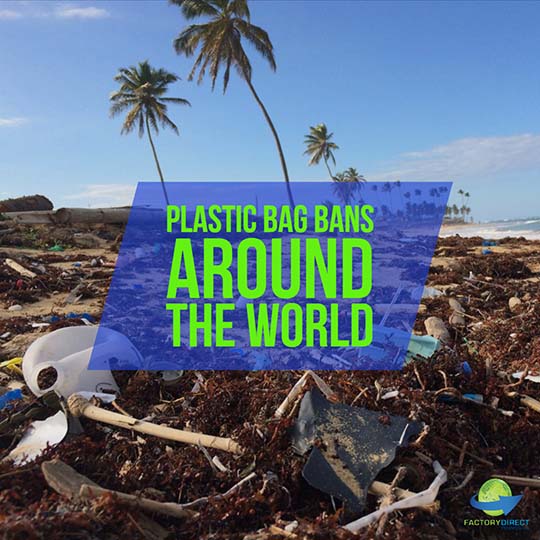 The European Parliament voted to ban single-use plastic bags, among other plastic items, throughout the European Union. If passed, this measure would prohibit plastic plates and cutlery, straws, drink stirrers, balloon sticks and more. This proposal also looks to minimize the overall use of plastic, through a reduction in single-use plastic items used for food and beverage containers. There are still some necessary steps before the ban becomes official, but it is anticipated this proposal will pass. If passed, officials hope to have this ban in place and effective by 2021.

Wetaskiwin, a city in the province of Alberta in Canada, is ready to ditch plastic. The Councillors in this city, about 44 miles south of the capital, Edmonton, unanimously voted to ban disposable plastic bags. Earlier efforts centered on plastic bag bans failed to gain the necessary support, but this latest endeavor was widely supported. The ban goes into action for retail stores on July 9, 2019. Starting June 1, 2020, all stores impacted by the ban will have to charge a 15-cent fee for each paper bag handed out.

Disposable plastic bags will be banned in the border city of Tijuana by the end of 2018. Businesses will have two years to adjust to the measure and after two years fines will be imposed for any retailers found to be in violation of the ban.

When the city council approved the ban, the hope was that by eliminating single-use plastic bags there would be less trash in the oceans and surrounding areas. Research found that trash levels in nearby areas dropped significantly after nearby California passed a state-wide ban in 2016, so everyone is cautiously optimistic Tijuana’s ban will have a similar impact.

Mumbai has struggled with the trash resulting from single-use plastic bags for a long time. Earlier efforts to stem the flow of plastic garbage proved to be ineffective, so officials upped the ante. A plastic bag ban passed in 2012 prohibited bags thinner than 50 microns. However, the ban was not strictly enforced, and thicker bags were still allowed. In June of 2018, all single-use plastic bags were banned, regardless of the thickness. Consumers and retailers found to be in possession of single-use plastic bags, as well as other disposable plastic items like cups and bottles, can face steep fines and even possible jail time.

To get a big view of plastic bag bans around the world, check out our map. This resource tracks successful plastic bag bans and fees, and the not-so-successful efforts to reduce plastic trash. Learn about updates to the map, as well as other green news by subscribing to our blog.

At Factory Direct Promos, we have been in the business of creating custom, eco-friendly reusable promotional products, including bags, for almost 30 years. During that time we have earned several certifications, including GOTS, Fairtrade, ISO 9001-2015 and FEDEX. All of which is a testimony to our high quality and social commitment. Whatever the size of your business or your order, we are here to help!