Making Fuel from Plastic Is Not Science Fiction 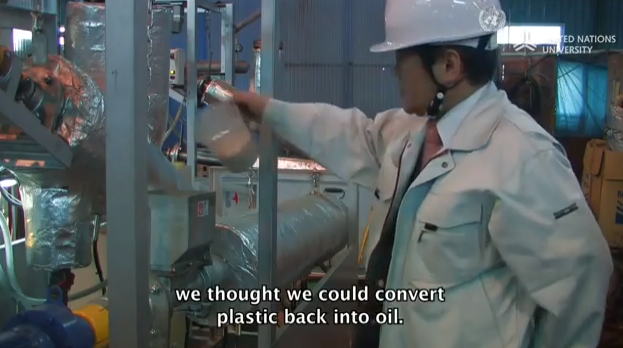 Fuel from Plastic? You Bet, Here’s How

A Japanese inventor named Akinori Ito was disheartened by all of the trash piling up and he had an interesting thought; if plastic is made from oil, can it be converted back to oil? The short version of the answer is yes, plastic can be converted back into oil. The machine that does this, the Carbon Negative System which is manufactured by Ito’s Blest Corporation, is a game changer that can turn garbage into a fuel source.  We have been utilizing recycled plastic for goods for decades but this is a game changer.

How the Carbon Negative System Converts Plastic Into Oil

When plastic, such as polyethylene, polystyrene and polypropylene, is placed inside the machine it is heated and the vapors produced are collected, cooled and condensed into crude oil. This crude oil can be used as is, or it can be further processed into gasoline or diesel. The machine can convert 2 pounds of plastic into 1 quart of oil using a mere 1 kilowatt of power. To put this into perspective if you were to burn 1kg of plastic it turns into 3kg of CO2, a greenhouse gas. The Carbon Negative System does not generate any pollution and it finds a use for materials that would most likely otherwise be landfilled or become litter.

The Reality of the Carbon Negative System

The Carbon Negative System gives waste management a bright future. The machine does in fact create oil which releases greenhouse gases when burned and it does serve to continue our dependency on oil. However, it offers an immediate solution to the ubiquitous litter problem. Plastic to some degree will always be part of our modern lives and we must work to reduce our consumption while recycling and innovating new ways to deal with it.

Currently in the U.S. and many other countries, too much plastic is manufactured and managing used and discarded plastic is a big problem. The Carbon Negative System creates a way to use plastic, other than creating consumer goods like the reusable bags made from recycled plastic water bottles we offer at Factory Direct Promos, and convert that material into a usable resource once it has fulfilled its purpose. The machine is even more convenient for countries that import oil – transporting oil and fuel uses resources, but if people use the Carbon Negative System they are able to create oil from materials on hand and this will greatly reduce or possibly diminish the need to import oil, saving money and resources.

A Carbon Negative System in Every Home

The Be-h is the base model and is intended for home use. The Blest Corporation also makes larger machines intended for businesses and industrial use. The Be-h machine is relatively compact and it is Ito’s hope that people will be able to use this device in their homes to convert their plastic trash into oil that can be used to power a generator or a stove or maybe to fill the gas tank in their car.

Right now the main deterrent to the Blest machine becoming a staple in every home is the cost – at about $10,000 for the base model it isn’t something most households can afford, but Ito is working to change that and to create a more affordable unit. The Carbon Negative System is truly a ground breaking invention that has the potential to turn trash heaps into a fuel source and not only eliminate the eyesore that is litter, but also to eradicate the environmental harm and the danger plastic litter poses to animals and their habitats.