Kenya Cracks Down on Plastic Pollution with Extreme Penalties 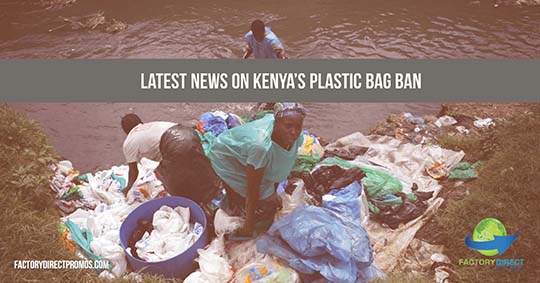 Disposable plastic bags and bag litter have become common in Kenya. Some estimates put plastic bag use in Kenya at 24 million per month. Plastic bags are everywhere, and most of them end up as litter. The trash problem is out of control. Discarded plastic bags hang from trees, blanket streets and waterways. In Kibera there are actual hills made from plastic bag trash. Grazing cattle often eat discarded plastic bags which recently caused concern over contamination of meat.

On August 28, 2017 a new law banning single-use plastic bags became official in Kenya. The law prohibits all plastic bags. Anyone found to be using disposable plastic bags will be fined. The fines will typically be several hundred dollars. In extreme cases offenders can be brought before a judge to determine punishment, which can include fines of up to $38,000 or jail time.

The penalties may seem harsh, but the plastic litter problem is so intense in Kenya that officials recognized they needed to do something equally drastic. Plastic litter is such a major problem in Kenya that it is causing dangerous flooding and impacting water and food supplies – and therefore it has a bearing on people’s health and safety. People deserve the live in a clean environment. By eliminating single-use plastic bags, there will be less trash and less impact on living conditions. The ban will also contribute to global sustainability goals. The ban will not solve the problem of the litter that is already in place, but it will prevent the problem from continuing to grow.

Critics of plastic bag bans have predicted it will fail, just like the earlier attempts. The latest Kenya plastic bag ban was designed to succeed. Aside from the penalties there was a six-month preparation period to get businesses and residents ready for the ban. People were not blindsided, they were made to understand what the ban entails and when it would become effective. Many Kenyans support the ban, because they are concerned for their wellbeing and want to do something to end the garbage problem.

Go Reusable and Put an End to Litter

Plastic litter is certainly a problem in Kenya, but it is a global problem, too. Making the switch to reusable shopping bags can have a serious impact when it comes to reducing litter and trash. Reusable bags are excellent promotional products that raise awareness and recognition for a brand. For factory direct pricing on all of your custom reusable bags, contact Factory Direct Promos. Don’t wait. Fill out a quote request today.