Will South Carolina Put an End to Plastic Bag Bans? 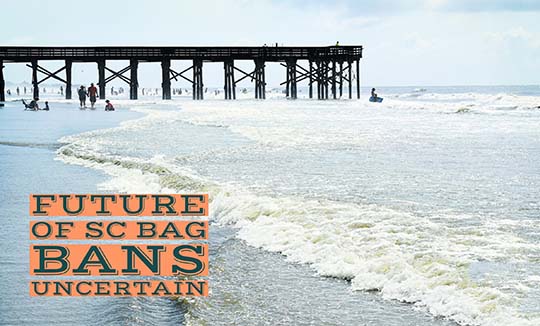 Plastic bag bans are spreading throughout the country, but the plastic bag ban movement may be over in South Carolina just as things were getting underway. The South Carolina House of Representatives voted in favor of a bill that would essentially ban plastic bag bans. If approved by the Senate, the bill would become law and cities and towns would be unable to pass bag bans going forward.

If the bill is passed it would not impact any plastic bag bans that were approved prior to January 31, 2018. This provision would allow the bans currently in place to stay. The bag ban movement in South Carolina got started when Isle of Palms passed a bag ban in 2015, making this city located on a barrier island the first in the state to pass such a measure.

Folly Beach followed suit and passed a plastic bag ban of their own; however, they took things a step further in their efforts to reduce litter. As of January 1, 2017, visitors to beaches in this seaside town cannot bring plastic bags, Styrofoam coolers, balloons or other similar items. Most recently, the city council of Surfside Beach approved a single-use plastic bag ban. Their measure will go into action on June 1, 2018.

Many other cities in South Carolina have considered bans of their own. From Aiken to Charleston, as well as most of the communities throughout the Lowcountry region, including Hilton Head, Port Royal and Bluffton. The bag ban movement in South Carolina is centered mostly on the coast. Litter is a more visible problem in coastal communities, and plastic bag bans have proven to be an effective solution for many cities and towns located on water.

Argument in Favor of the Bill

Officials and residents in favor of the bill believe production of single-use plastic bags is vital to the state economy. Many believe that plastic bag bans will impact sales and hurt South Carolina businesses and employment levels. This argument fails to address the need for reusable shopping bags created by plastic bag bans. While the bans will reduce the need and use of disposable bags, such laws create a demand for more durable products.

Many supporters of plastic bag bans cite the negative environmental impact caused by disposable plastic bags. The thin film bags are made from natural gas and oil, both of which are nonrenewable resources. The lightweight bags are seldom recycled because of the extreme difficulty and are more likely to end up in landfills or as litter. Trash is just plain ugly to look at, but for coastal communities that heavily rely on tourism, trash can hurt the local economy and negatively impact businesses.

Plastic bag bans have also gained support from many individuals who may not agree with the idea of banning plastic bags, but they disagree with action being taken at the state level. Many local officials and residents feel plastic bag bans should be decided at the local level. What do you think?

We will continue to monitor the progress of the South Carolina bill and will update you as we learn more. In the meantime, please feel free to request samples and a quote to create a reusable bag for your business that will help make an impact on both your bottom line and our planet.