Vermont on The Verge of a Plastic Bag Ban or Fee? 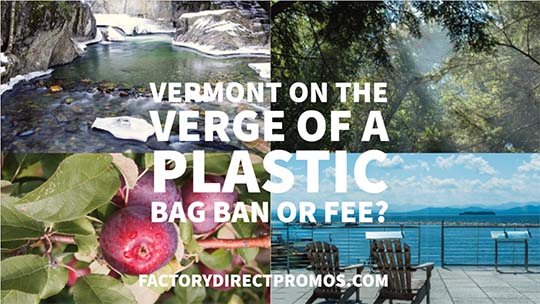 Vermont has considered measures to ban or levy fees on disposable plastic bags for many years, but two proposals in Vermont could put an end to, or at least significantly reduce the use of disposable bags.

One measure would ban single-use plastic bags and non-recyclable paper bags. The second measure would impose a 10-cent fee per bag handed out at the checkout.

Both proposals have already missed key legislative deadlines, so they will not pass during this session. The earliest a ban or fee could pass would be 2018.

Recycling Is Not Enough

The thin film bags can easily be tangled in the processing equipment. When this happens the machinery needs to be shut down and the blockage must be removed. This slows down the process, and diminishes the effectiveness of recycling as a viable solution.

Jennifer Holliday, the Compliance Program and Product Stewardship Manager for the Chittenden Solid Waste District explained in a report just how much of a hassle recycling single-use plastic bags can be. Per one estimate 3-4 hours a day are spent cleaning machines of materials, including disposable plastic bags. About half of a work day is spent cleaning up equipment instead of working. This adds up to about 780 hours per year in lost productivity.

This is not the first time legislation around a plastic bag ban will be discussed in Vermont. Going back to 2012 officials have considered such measures, but early attempts were tied to expanding the statewide bottle bill.

The bottle bill is a deposit program that encourages recycling of soda and beer cans. Lawmakers wanted to expand the bottle bill to cover cans used for other types of beverages. Opposition to parts of the legislation caused the entire measure to fail to pass.

This time around the proposed plastic bag ban will stand alone as it’s own legislation. Residents are behind the measure and have shown their support of a plastic bag ban by signing a petition.