The European Union (EU), an economic and political union of 28 countries located mostly in Europe, has been seriously contemplating whether to ban disposable plastic bags. Several countries that belong to the EU have already passed outright bans or implanted fees on single use bags (check out the bans at https://www.factorydirectpromos.com/plastic-bag-bans), but currently there is no law at the EU level. This issue has been researched and discussed, but the vote has been pushed back on numerous occasions leaving many wondering if a decision will ever be made.

Should @European_Union ban disposable bags? RT if you say YES! Reply if you say NO! https://t.co/TPzvHHZFAn #GoReusableNow

Environmental Impact of Disposable Bags is a Major Problem

The EU estimates that the average EU citizen uses about 500 disposable plastic bags per year. The problem with single use plastic bags is that they are not biodegradable, so if they are landfilled they will not safely breakdown and the lightweight construction makes them prone to become litter.

Plastic bag litter is a serious health risk to animals and their habitats, it clogs rivers and oceans, and is an eyesore. This is not a problem unique to Europe given that numerous cities and towns throughout North America and Australia, as well as entire countries in Africa and China have issued single use plastic bag bans. Many EU countries have implemented bans in an attempt to prevent this problem from continuing to grow, or issued a fee on each non-biodegradable disposable bag handed out to discourage people from using single use bags in favor of using reusable shopping bags.

Earlier this year, Italy passed a law prohibiting the sale of shopping bags not made of paper, natural fibers, polyamide fibers and polymers. The disposable bags that are allowed must feature a clear description that indicates what the bag was made from and how it could be reused and disposed. What makes Italy’s law so great is that it promotes the use of sustainable materials; however, not everyone sees this law this way.

For instance, the United Kingdom was upset that Italy intended to pass this law because of concern that it would prevent the movement of goods between EU countries. The UK even went so far as to attempt to block the law but was unsuccessful in their efforts. Italian officials claim this measure will not impact trade and their intention was to reduce waste and protect the environment while also “promoting industrial and technological development in the field of chemistry from renewable sources.”

Details of EU Bag Ban Yet to Be Confirmed 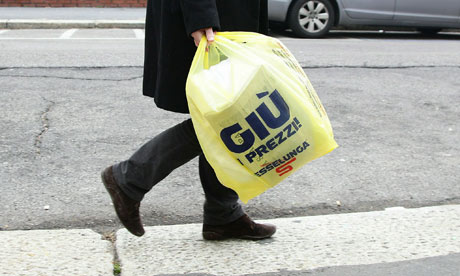 The EU has proposed labeling disposable bags to clearly indicate whether it is ‘biodegradable’, indicating that it will safely break down in natural conditions in the environment, or ‘compostable’, meaning that it will break down in an industrial composting facility. The thought is that if people are better informed they can make responsible decisions regarding the types of bags they choose to use.

While there has been tremendous amount of support for banning disposable plastic bags, it is largely believed that the EU will not issue an outright ban, but rather they will issue a fee for disposable bags. At this time the EU has not made a decision on the matter and the EU citizens along with the rest of the world continue to wait for a ruling.

What do you think? Should the EU push for the bag ban?