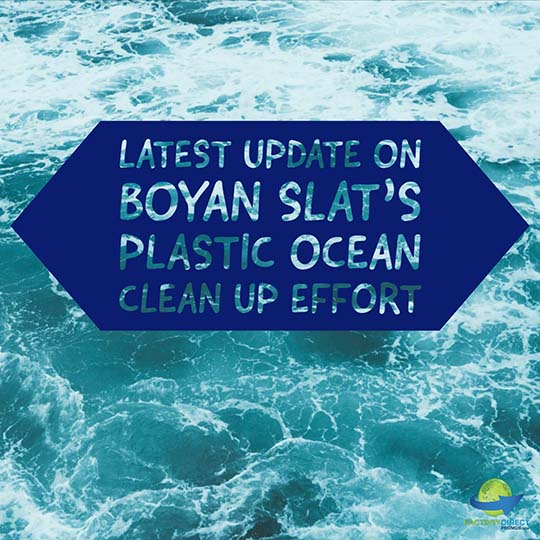 Ocean trash is a very real problem and increased awareness of the Great Pacific Garbage Patch has contributed to a variety of solutions from all over the world to this global problem. Addressing the flotilla of trash requires a multi-step approach.

Trash must be reduced through increased recycling and reduction efforts, such as plastic bag bans. The existing garbage must also be cleaned up. One Dutch inventor thinks he has a viable solution, and he’s not letting setbacks get in the way of his plans to rid the ocean of rubbish.

We first introduced you to Boyan Slat and his passion project, Ocean Cleanup, several years ago. At that point, his plans were still in the developmental stage. Slat dropped out of school at 19 years old in order to pursue his project to clean up the oceans. A lot has changed since then, but the goal is still the same.

Slat’s device features barriers connected by a 2,000-foot long screen. The natural current and movement of the water wash trash into the net where it is captured. The entire machine moves through the ocean to constantly clean new areas. The first prototype was towed out into the Pacific Ocean late in 2018.

Bump in the Road

A few weeks into its service, the machine, known as System 001, was not working as intended. While it was pulling trash from the ocean, it was not holding on to its spoils. While a crew was visiting the machine at a location about 1,000 miles off the California coast, a bigger problem was discovered.

A section of the screen that catches rubbish had become detached. The damage is blamed on the constant battery of wind and waves.

System 001 will be brought to Hawaii and efforts to repair the screen will be made. If the necessary repairs cannot be made in Hawaii, the gear will be brought back to its home port in Alameda, California, by barge.

Critics of the Ocean Cleanup project and System 001 have claimed this damage was expected given the design. Slat takes this in stride and explains, “We didn’t plan for it to break, but we always accounted for a possibility to take the system back in and out several times during this project.”

The More You Know

While System 001 is brought in for repairs, engineers will review the data collected from the time the equipment spent at sea. This information will be used to further fine-tune the design and implementation of the machine to enable it to function in the most productive and efficient manner.

“We think the fastest way to clean the ocean is to learn by doing,” explains Slat. The only way to truly test the design is by deploying it in the ocean. Waiting to perfect the design takes time and means less time is spent actually removing trash from the ocean.

In the short time System 001 was deployed, it pulled about 4,400 pounds of trash from the ocean. This only accounts for a small amount of the total problem, but System 001 did what it was supposed to do – to a degree – while it was deployed. This is proof of concept and shows that while more work is necessary, System 001 has the potential to succeed.

System 001 is undergoing evaluation and repairs will be made based on what the Ocean Cleanup team learns. This is one of many exciting ocean cleanup projects that show promise. You can pitch in and do your part by reducing trash.

Generating less garbage by opting for reusable items and properly disposing of the materials you do use can provide tremendous help. Plastic bag bans are a great example of how easy it can be to do away with single-use items in favor of reusable gear.

Learn more about the Ocean Cleanup, plastic bag bans, Eco Specials and more when you sign up for our newsletter. We are always sending out relevant and eco-friendly news to keep you in the know and up-to-date when green news breaks.