Could New York City Be the Next Major City to Ban Plastic Bags? 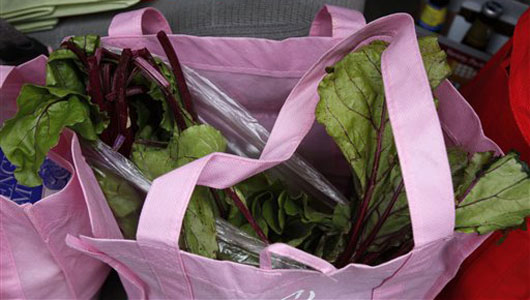 A familiar group is working to ban plastic bags in a New York City. The environmental group Clean Seas Coalition have opened an office in Manhattan. Clean Seas is looking to pick up the pieces of the failed bag ban after a brief campaign by Mayor Bloomberg’s office fell short in 2009. The Clean Seas Coalition most certainly know a thing or two about how to implement a ban in a major metropolitan area.

Clean Seas Coalition was the driving force behind the disposable bag bans and fees set up in San Francisco and Los Angeles. Since Los Angeles implemented a disposable plastic bag ban and a 10-cent fee on paper bags just over a year ago the city has seen a 93 percent reduction in waste. Given that New York City creates about 12,000 tons of trash everyday eliminating plastic bags would be a huge reduction and help.

“Plastic bags have become an icon of waste,” said Jennie Romer, Atlantic Region Director for Clean Seas Coalition. Romer worked on the initiatives in San Francisco and Los Angeles, so she has
spent years working to make plastic shopping bags history. Banning plastic bags is never a small feat, and taking on anything is New York can be daunting, but Romer is confident New Yorkers can make a ban a reality.

Howard S. Schiffman, an Environmental Conservation Professor at NYU, summed things up nicely when he explained, “[Plastic] is a petroleum-based product which means we need oil to make them… so, the manufacturing process is a problem and the fact that it doesn’t degrade is a problem. We also have the problem with paper bags too… if we use paper bags, well, we need trees in order to get the paper, and there is an industrial process too so that produces carbon and that’s a problem. So, there is really no free lunch here, the question is what’s best for us?”

The tag team effort of banning plastic bags while at the same time imposing a 10-cent fee on paper bags is tried and true. The beauty of this setup is that it eliminates plastic shopping bags and the shortcomings that the manufacturing, use and disposal process bring. The 10-cent fee on paper bags is just enough to deter shoppers from exclusively using paper which has been the outcome in some municipalities that issued plastic bag bans, but imposed no fee or ban on paper.

Studies have shown that paper bags are much more likely to be recycled, so paper has a much less severe impact on the environment, but they do take a toll.  If all shoppers were to replace their plastic bag habit with paper, the environmental impact could be major. This is where the fee really saves the day. Most shoppers will turn to reusable grocery bags as a long-term solution to avoid the fee, but 10 cents is not going to set most people back too significantly if they run into a store and feel they need a bag.

Right now the campaign has consisted of distributing images of plastic bag litter to get people thinking about the environmental impact plastic bags take. Clean Seas Coalition has also reached out to local lawmakers to start a dialog.

2 thoughts on “Could New York City Be the Next Major City to Ban Plastic Bags?”