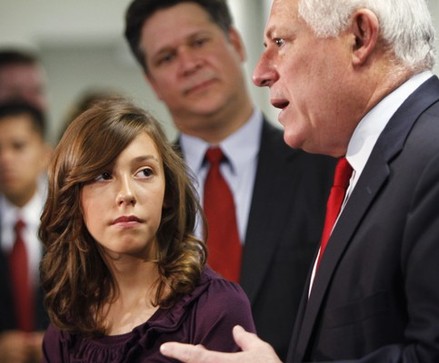 Last we left off with the state of Illinois there was talk of legislation that would prohibit the banning of disposable plastic shopping bags and place the responsibility to recycle plastic bags on the bag manufacturers. Initially this sounds like a great idea – since only a very, very small percentage of the plastic bags in existence are recycled any effort to increase the amount of disposable plastic shopping bags recycled has got to be a good move, right? 12 year old Abby Goldberg did not think this bill was a good idea. She was so passionate about working to make sure this bill never became official that she started an online petition asking the Governor, Pat Quinn, to veto the bill, and she collected 155,000 signatures backing her up. This resourceful youth even had the opportunity to hold a press conference and present her petition to Quinn.

The Problem in the Fine Print

Under the proposal plastic bag manufacturers would have to register with the state, pay fees, set up bag collection and recycling programs and keep the state keyed in with the results of their efforts. Manufacturers would also have to print their name on all of the bags they produce so the origin of stray bags could be identified. The Illinois Environment Protection Agency would ultimately manage the program. The goals of the bill are pretty lofty; by 2015 the state would expect to see a minimum 12% improvement in the amount of plastic bags recycled. What is so concerning about this proposal is the plastic bag manufacturers are given the green light to continue producing these environmental hazards. Plastic bags are a problem in need of a solution – this bill does not address the problem, it just attempts to make it less noticeable by steering plastic bags into recycling bins.

There are certainly merits to this legislation. Increasing the amount of plastic bags recycled is a part of the solution; however, it is not the full extent of the solution. The plastic shopping bags already in use need to be disposed of in an environmentally responsible manner and recycling is the best method. Also, having one set of rules that applies to the entire state is pretty tempting – just ask Hawaii now that they’ve passed a statewide ban of disposable plastic bags. One law that applies to all of the cities and towns is convenient and eliminates the hassle people are bound to run into. Unfortunately the fine print of this harebrained plan removes the authority of cities and towns to implement bans on plastic bags or to charge fees for disposable shopping bags.

A School Project Turns Into So Much More

Abby wanted to ban plastic shopping bags in her hometown of Grayslake, Illinois as part of a seventh grade school project. She is passionate about the cause and stores reusable non-woven polypropylene bags in the trunk of the family car so they have bags at the ready whenever they head to the store. Once Abby saw this bill and she realized its passage would make her plan impossible she knew she had to take action. She posted her petition which is titled “Gov. Quinn: Don’t Let Big Plastic Bully Me,” to Change.org. Her page went viral and before she knew it she had rallied the support of people who agreed that this legislation is just not the best plan. While she is not the first to take a stand and start a petition, she will certainly not be the last. Starting an online petition is such a great idea because it eliminates the legwork and allows Abby to safely spread her message and garner support. Taking her petition digital also allows her to reach more people quicker than would have been feasible with a traditional pen and paper petition. Social networking makes it easy for a web address to travel like a plastic shopping bag caught in the wind, so Abby’s petition can reach into the far corners of Illinois without her so much as stepping foot outside or recruiting likeminded individuals to hit the pavement and drum up support. Since she was able to round up so many signatures so quickly Abby could take action and go public with her petition before the governor had a chance to sign the bill.

The future of plastic bags in Illinois is still unclear. Quinn has yet to sign the bill or veto it and his office has kept mum on the issue. He did however accept Abby’s petition in person and appear with her – this is promising because if he intended to veto the bill it would be in poor judgment to appear with Abby. Quinn would be handing anyone who ran against him in the future a fantastic photo that would be the centerpiece of any smear campaign. At this point it is still just too soon to know, but there is hope that Quinn will do right by Abby and veto the bill, thus keeping the door open for cities to implement plastic bag bans and encourage using reusable grocery bags as a long term and eco-friendly solution and allowing Abby to get back to her first plan which was to ban plastic shopping bags in her hometown.

It is incredibly exciting to see children get involved in important issues and take the initiative to create change and do something about potential legislation they do not support. By researching the issue, forming an opinion and standing up and taking action Abby is learning and developing valuable skills that she is bound to use again and again. The young lady is poised to do great things, first and foremost for her hometown and home state, but her future is bright and full of possibility because if she can do what she’s doing now she will be prepared for so much more as she gets older.