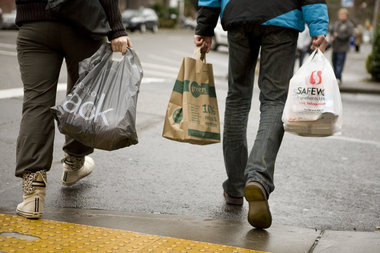 The City of Los Angeles is working to take things to the next level. Los Angeles County has been hard at work drafting and implementing a ban on plastic bags that also calls to charge a fee to use paper bags; however, this ban only applies to the unincorporated areas of the County – the areas that do not fall under any municipalities. Not to be outdone, the City of Los Angeles has decided to put their own bag ban into action. This ban has been described as “one of the most aggressive actions against single-use bags in the nation,” according to Matthew King, spokesman for the environmental group Heal the Bay. All the stands in the way of making the ban a reality is a vote by the City Council, and if that goes well an environmental review.

Bag bans are nothing new in the state of California; towns and cities all over the Golden State has banned single use plastic bags. Paper bags are usually not outright banned – oftentimes a nominal fee is placed on disposable paper bags. The idea is to encourage reusable shopping bags by discouraging paper bags. What sets the ban currently under consideration in the City of Los Angeles apart from many of the other bans on the left coast is that this one bans paper bags, too. “With paper bags, you’re still generating litter,” said Councilman Paul Koretz, who introduced the motion proposing the ban. “We’re taking the next step.”

Plastic bags have earned such a bad reputation because they are so likely to end up as litter. Due to their lightweight construction plastic bags can easily be lifted and carried off by the wind until they are deposited in vegetation like trees or shrubs, or a body of water. The only way to get rid of these eyesores is to pick up the litter – it’s not going to break down or recycle itself, human assistance is required. Plastic bags can be a serious health risk to animals and their habitats, as well as the environment. Since this litter is so visible it perpetuates the notion of just how bad plastic bags are on the environment. Since paper bags have a little bit more heft than plastic bags they do not have the tumbleweed tendencies of plastic, so they are less likely to end up as litter. In stores not impacted by a ban plastic bags are more popular, so just based on the number of plastic bags in circulation that contributes to the likelihood of extra bags being cast off as trash. In the much less common event of a paper bag being unleashed on the environment it is not as noticeable because the paper will break down in time. This creates a false sense of safety with paper bags. Because the problem disappears it is not as visible and it conveys the idea that there is no problem.

The green movement has ingrained in people the idea of reusing and recycling and items that are biodegradable are revered as being a safe and smart choice. Unfortunately, this is not completely true. Paper bags are biodegradable and this is a great characteristic; however, so much energy is used to create them between tearing down trees and the actual manufacturing process that the positives brought to the table by paper bags are outweighed by the negatives. Paper bags constructed from virgin paper take a major toll on the environment. When it comes to somewhat eco-friendly paper there are two options. FSC certified, or Forest Stewardship Council certified, are forests that are responsibly managed and monitored by third parties to ensure the integrity of the growing and harvesting process. FSC certified forests are re-evaluated on a regular basis to make sure the certification is still valid and deserved. Paper bags made from PCW, or post-consumer waste paper are constructed from recycled paper. These options are less harmful, but they are not as good for the environment as reusable grocery bags.

Is a Statewide Ban Next?

Los Angeles’ ban is not looking to settle for the lesser of two evils. They want to put an end to both plastic and paper bags. This is ambitious ban that if put into action would mean everyone who shops in LA would have to use reusable bags. Dave Heylen, a spokesman for the California Grocers Association said, “We look forward to working with the city as they look at options for consumers to transport their goods from stores.” The entire state of California is watching Los Angeles as a statewide ban of both plastic and paper bags is an idea that many have considered and tried to put into place. As recently as last year a statewide ban on plastic bags made it as far as the Legislature before it was shot down. Many cities and towns have bans in place and at the rate things are going most of the state should be impacted by a ban sooner rather than later. While this is definitely a positive, the drawback to having a patchwork of bans is that people may be within driving distance of several different bans. A 20 minute drive in one direction may bring shoppers to a town that bans plastic bags but charges a fee for paper bags, while the same distance in the opposite direction may not have any ban in place. This can be confusing and a hassle to shoppers who may just need to run in the store to pick up a few items, but end up getting sucked into the legalities and environmental issues at the heart of most bans. Some shoppers choose to be informed and where the monies raised by fees charged on paper bags are allocated can influence whether they decide to use paper bags. A standardized statewide ban would remove the hassle and unknowns and make life for all Californians easier. California is definitely a trendsetter and there are many big and exciting changes on the horizon.