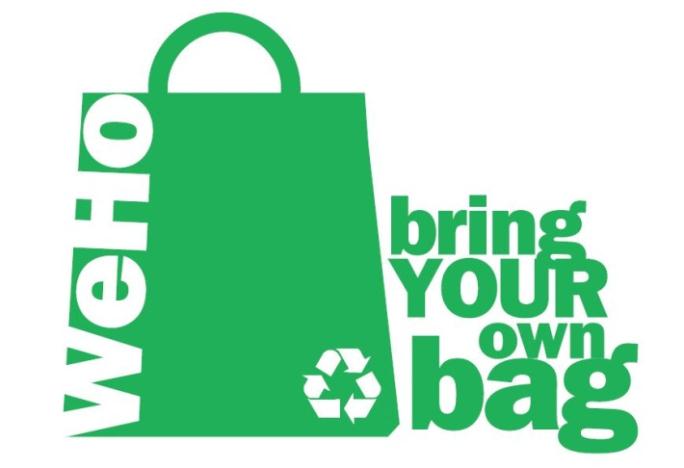 There are a lot of people working every day to ban single use plastic bags in their hometowns and communities to make reusable bags a common behavior. Their reasons may differ, but concern for the environment is usually a common theme. This week for What’s In the News Wednesday, we’ve rounded up several locations that have either expanded their disposable bag ban (congratulations, West Hollywood!) or are working to implement their own ordinance.

In August of 2012, the West Hollywood City Council voted to pass an ordinance that banned single use plastic bags in pharmacies, grocery and retail stores in the 1.9-square-mile city. West Hollywood’s ruling is unique because it also includes clothing stores and newsstands – two retail businesses not typically impacted by disposable bag bans.

Back on February 20, 2013, large retailers (defined as having 10,000 square feet of space or more) were required to follow the ordinance. As of August 20, 2013 the single use bag ban will be extended to smaller stores, officially putting an end to disposable plastic bags in West Hollywood.

The Durango, Colorado City Council voted 4-1 in favor of a law that would impose a 10-cent fee on disposable paper and plastic bags handed out for large retail chains in the city – this would impact the local Wal-Mart, the two City Markets and Albertsons. There have been heated discussions on the topic of the bag fee for many months with passionate arguments on both sides of the issue. Ultimately, the fee was voted in and is scheduled to go into action sometime in 2014.

Residents opposed to the disposable bag fee have 30 days, or until September 6, to collect signatures from 344 people, or 10 percent of those who voted in the last city election and file a petition that would force the council to repeal the fee or trigger a referendum on the issue. There has been a lot of support behind the notion of a petition and the city attorney, David Smith, has made it clear that the city will only recognize one petition.

An organization opposed to single use plastic bag legislation named Save the Plastic Bag Coalition filed a lawsuit against Marin County, a county in the North San Francisco Bay area of California. The lawsuit argued that the county violated the California Environmental Quality Act (CEQA) by passing a single use plastic bag ban that impacts unincorporated areas of the county in January of 2011 without first completing an Environmental Impact Report (EIR).

The ruling favored the county and this is certainly a win for Marin County, but it is also a win for Mill Valley, a city within Marin County that is now planning to implement an ordinance of its own. The Mill Valley City Council is discussing a law that would ban single use plastic bags at grocery stores, pharmacies and convenience stores and levy a 5-cent fee on disposable paper bags that would later increase to 10- or 15-cents.

It is so inspiring to see people come together and work towards a common good. As the folks of West Hollywood and Marin County have proven it is possible to ban disposable plastic bags. We throw our full support behind Durango and Mill Valley as they work toward getting their bans approved and on the books.

We cannot wait until we can add these locations with green pins to our bag ban map.  If you haven’t seen the map, go check it out now HERE and please let us know about any bag bans you are working on or that we have missed on our map.