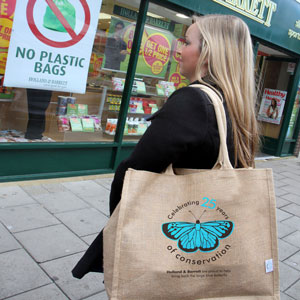 The Corvallis Oregon City Council unanimously voted recently to ban disposable plastic shopping bags in retail outlets. This move makes Corvallis, a city of about 54,000 people located 82 miles south west of Portland and home to Oregon State University, the second city in Oregon to ban single use plastic bags. Portland was the first city and Eugene is making great strides in their quest to become the third Oregon city to ban disposable plastic shopping bags. Those in favor of the ban cite the same reasons numerous cities and towns across the world have used when proposing to ban plastic bags: discarded plastic bags are a serious threat and danger to wildlife and they pollute our oceans.

Groups opposed to the ban claim the bags are convenient and not so bad for the environment since they are recyclable. While it is true that plastic bags can be recycled the reality is that only a very small percentage of the plastic bags unleashed unto the world actually are recycled. Countless studies have shown that an overwhelming majority of consumers are unaware how or where to recycle their plastic bags. Some places have curbside pickup and others feature bins placed in stores or other locations around a city, making it confusing for people to know where to deposit their plastic bags. Recycling actually is not all the great of a solution anyway because those bags will just be made into new disposable plastic bags that will more than likely not be recycled and will end up lining a trash can or taken on a walk with the dog and ultimately end up in a landfill – where is will sit for no one is really sure how long. Plastic bags that are not recycled or make a permanent home in a landfill often are lifted and carried around by the wind. Bags will either make their way down streets and sidewalks or become lodged in trees and shrubs or deposited in a river, lake and other waterway. When disposable plastic bags become litter things start to get ugly. The bags are eyesores that make otherwise nice areas look rundown and shabby and this can corrode the sense of community and pride people should feel in the places they call home. In areas that depend heavily on tourism dollars to support the local economy this can have dire consequences.

Single use plastic bags are just plain trouble for wildlife, too. It is all too common for animals to mistake the bags for food and ingest them – once eaten the plastic can become tangled in the animal’s digestive system and may possibly lead to a painful and agonizing death. Eating plastic bags is not the only way these nuisances spell trouble for wild life, if an animal becomes tangled in a bag they may not be able to defend themselves against predators, care for their young or protect themselves from the elements, all of which can have some pretty dismal outcomes.

Community members against banning plastic bags also claim the ban denies consumers a choice. It is unclear why people feel they need to choose to harm the environment, but this argument is typically bandied about when talks of doing away plastic bags start up. Plastic bag bans are not about limiting people’s choices, but about doing what’s best for our shared planet. In the grand scheme of things dropping plastic for reusable shopping bags is a very minor lifestyle change that can reap major benefits. Most people do not realize the harm plastic bags can cause because aside from litter many of the other symptoms are not always that visible. It is rare for people to frequent a landfill so the average person is not faced with the amount of plastic that just sits since this non-biodegradable material does not break down. People opposed to bag bans see the ban as doing away with the convenience of plastic bags they do not see all of the problems the ban sets out to remedy.

The fine print of Corvallis’ law requires stores to charge a minimum 5-cent fee on paper shopping bags. This fee is a tactic to encourage shoppers to bring their own eco-friendly bags such as non woven polypropylene grocery bags when they do their shopping instead of exclusively using paper bags at the checkout. Stores with more than 50 employees will have 6 months to roll out the ban, while smaller businesses will have a full year to implement the plastic bag ban. Stores that decide to go rogue and not abide by the bag ban will have to pay a minimum $200 fine for each offense. Bars and restaurants are exempt from the ban since bringing reusable bags into an establishment where food is served could pose a health risk.

Reusable bags need to be cleaned, but it ultimately is the responsibility of the owner to clean his or her bag. For arguments sake, if someone brings a previously soiled reusable bag into a restaurant to pick up a take-out order and they set their dirty bag on a counter, germs from that bag can be transferred to the counter, and those germs can in turn be transferred from the counter to the next order or bag set on the counter, thus spreading germs and bacteria. This scenario can easily play out in any grocery store, but people know to wash produce and clean surfaces where they set and unpack their groceries, so possible cross contamination is avoided. While dirty reusable bags can still pose harm, the harm is intensified in restaurants thus banning the use of plastic bags where cooked food is served is tricky.

Doing away with the plastic bags handed out in stores will still diminish the amount of plastic bags out there greatly, so that is still a success.

It is exciting to see more cities taking these issues seriously and making efforts to implement bans on plastic shopping bags. The people of Corvallis should be proud of the work they are doing and they are an inspiration to other towns and cities thinking about making reusable shopping bags the norm.