California on the Verge of Banning Single Use Plastic Bags 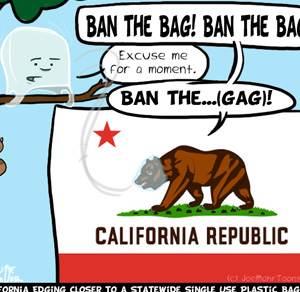 A proposed bill by state California Senator Alex Padilla (D-Pacoima) aims to ban disposable plastic shopping bags in grocery stores and pharmacies starting January 1, 2015. Shoppers would be encouraged to bring their own reusable grocery bags or pay a fee, probably about 10 cents per paper bag used. The proposal would extend to convenience and liquor stores starting on January 1, 2016.

As the cartoon illustrates, plastic bags are a danger to wildlife. They get stuck in trees and litter habitats, they are a serious choking hazard to animals and result in the death of scores of animals every year. While there is a lot of sentiment supporting the ban, the majority of those against the ban are part of the plastic bag industry.

The plastic bag industry has blocked bag bans in some Californian cities and they are looking to prevent a statewide ban from passing. Despite this opposition though, the movement to ban disposable plastic bags is stronger than ever.

Support Continues to Mount for Ban

As things stand now in California about 70 different cities and municipalities have their own unique plastic bag bans or laws that regulate the distribution of disposable bags. Fong also points out that following all of the different city and county laws is unnecessarily complicated and expensive. One law that applies to the entire state makes life easier not only for the California Grocers Association, but also for shoppers, too.

We’re Not There Yet!

The future of plastic bags in California is still unclear. The measure still has a ways to go before becoming official, and even if it does pass it would not take effect until 2015; however, much progress has been made and there is a lot of support to ban plastic bags in the state.