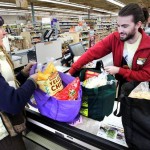 It is well known by now that San Francisco was one of the first cities in North America to ban plastic bags. The initial law that went into action in 2007 banned plastic disposable bags from being distributed in large grocery stores and chain pharmacies. The reasoning was ground breaking back in 2007 since the notion of banning plastic bags was still in its infancy, but it was simple enough: plastic bags are not biodegradable so when they are tossed in landfills they just take up space. Furthermore, disposable bags wreak havoc on the ocean, wildlife and their habitats, they clog sewer systems and storm drains, and they have a tendency to end up as litter. This litter was a blemish on the beautiful city of San Francisco and was costing serious taxpayer money to pick up. It took some work and convincing, but the ban was, and continues to be a success. San Franciscans gladly bring reusable grocery bags when they go to the store and the streets and parks in the area have never been cleaner. Their ban served as inspiration, motivation, and a starting point for other towns and cities looking to say goodbye plastic bags.

Other cities have learned, adapted and improved on San Francisco’s model. Many bans now enacted in other cities include all or at least most retailers, not just large grocery stores and pharmacies, and just about all bans also impose a fee or tax to use paper bags. The folks of San Fran realized their ban was not as thorough as some of the more recent bans, so they are at it again. A new proposal was recently voted into law, and starting in October of this year plastic bags will also be banned at restaurants, gift shops, hardware stores, boutiques, and other retailers. All stores covered by the ban that give out other types of bags, such as paper bags, as a substitute must charge a 10-cent fee per bag. Stores are allowed to keep this fee as revenue. The hope with this proposal is the same as with the original ban, to encourage people to use reusable shopping bags. Extending the ban to other stores and businesses is intended to further reduce plastic bag consumption. Since fewer bags are being used they will not end up in landfills, clog drainage systems or pose harm to wildlife. If the demand for plastic bags goes down than over time fewer should be made so the problem of plastic bags should not continue to get larger.

Per Mayor Ed Lee, “The intent was never to nickel or dime anybody, but if it takes 10 cents to remind somebody that their habits are in their control, I think that’s something we’re willing to consider doing.” Some business owners fail to agree with the Mayor on this point. Small shops that cater largely to tourists have spoken up to explain that their customers may be turned off by the ban and fee. Out-of-towners may not think to carry reusable bags as they sight see and while the 10 cent fee is not an exorbitant price it may be just enough to discourage tourists from picking up souvenirs. Shop owners feel the ban is good for stores that primarily serve locals and the fee will help people who routinely shop in the city to remember to bring their reusable bags. Regardless, the City is serious about protecting the environment and banning bags, so the proposal will move forward. Stores that violate the ban will pay fines ($100 for the first offense, $200 for the second infraction, and $500 for each additional offense). Staff from the Department of the Environment and elected officials have been meeting and working with small store owners to help prepare them for the transition and the Mayor promised that education would be emphasized over enforcement in the beginning. The administration is also open to modifications to the law if necessary.

Even though San Francisco was one of the first cities to ban plastic bags they are showing that there is still more work to be done. Laws and practices constantly evolve and the city is once again a trendsetter by adapting what was at the time a great law to be a better fit for today’s world. Simply placing the initial ban several years ago was not the end of the issue. The City of San Francisco should continue to serve as a model and inspiration as they strive to fine-tune and perfect their ban.